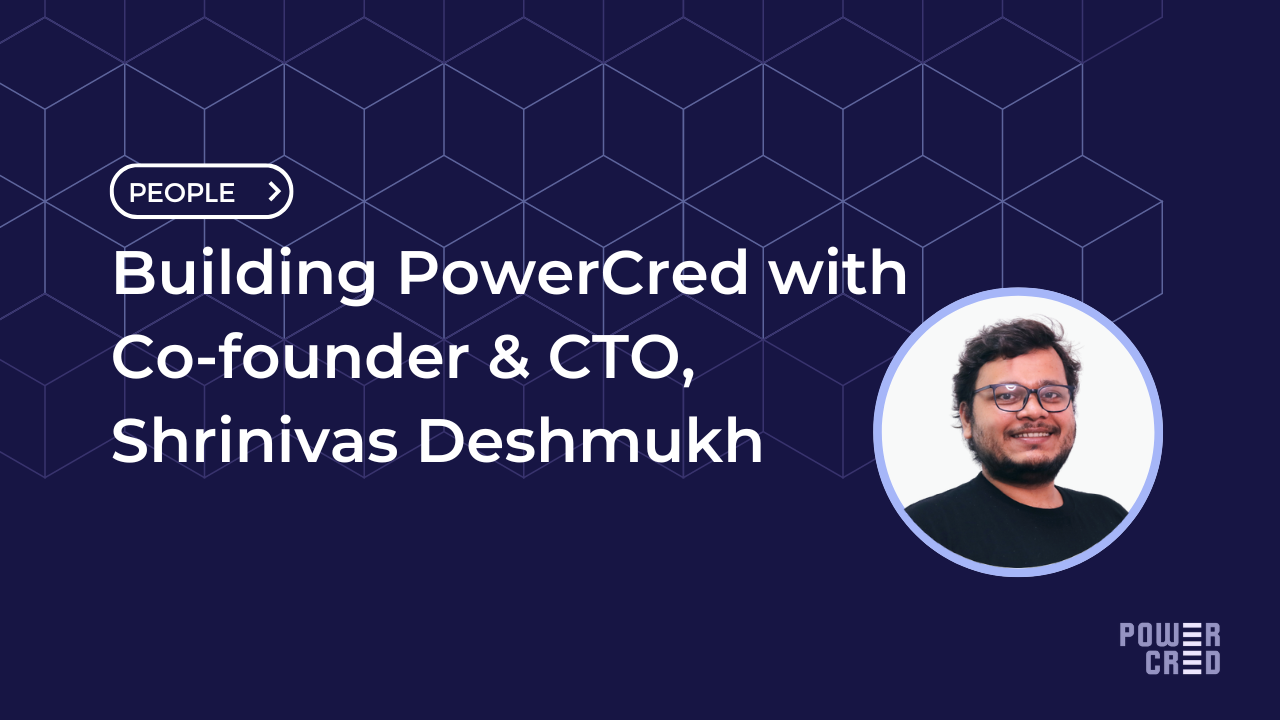 What started as a simple idea that two friends discussed over a drink has shaped into a high-growth fintech start-up operating successfully in the challenging South East Asia market today. The idea behind PowerCred was given impetus by the passion and entrepreneurial drive of its founders to enter into the fintech space with a solution to an existing and elaborate problem- the small business credit gap.

Shrinivas, fondly known as Shrini within the team, graduated as an engineer with a specialization in information technology. Soon after graduation, he started working as a consultant with banks in India and Singapore. As a data engineer, Shrinivas had the exposure and opportunity to work across technologies including DevOps, IoT, big data and machine learning. “I enjoyed what I did, but the job was never enough. The drive to do more, contribute more, learn more and make a difference… I knew entrepreneurship was the way ahead for me”, said Shrinivas. His entrepreneurial mindset had shaped during his days as a student itself. While his early-on ideas kicked off amazingly, given his expertise and acumen as a data engineer, scaling these ideas into a business needed some non-technical, business and marketing-oriented support. In his individual capacity, Shrinivas has developed 237+ applications till date including an AI based healthcare app for diabetes prognosis. A strong believer of using technology for a cause, he has also built a product impacting 600,000 elderly people in Singapore.

Shrinivas recalls being introduced to co-founder Kunal Goel by a friend, a meeting that he hadn’t expected would be the turning point for him, the start of his entrepreneurial journey. Kunal discussed the start-up idea with Shrinivas over a drink, an idea that got him interested almost instantly. “The idea was absolutely in sync with my domain and the product would be contributing to a greater cause- small business growth and financial inclusion”, he recalls. “This was the entrepreneurial opportunity for me to leverage my technology expertise to make a difference, alongside Kunal who seemed like the perfect business partner with his knowledge and expertise complimenting my own”, he added. At a time when both- Kunal and Shrinivas were being offered jobs that were hard to refuse, the duo decided to take the plunge and kick-start their entrepreneurial journey of building PowerCred.

Based in Singapore, the hub of fintech in Southeast Asia, they decided to build a prototype that would be used to raise funds from friends and family. Being the tech guy, Shrinivas took up the responsibility of developing the prototype while his co-founder Kunal would take care of the marketing and fund-raising for the start-up. Within 3 weeks, they had a prototype ready to be pitched. The brilliant prototype and Kunal’s advocacy of the business idea were able to help them secure enough funds to build PowerCred- Powering Credit for SMEs. The idea was great and the execution plan was in place but like every start-up, they faced their share of challenges. Challenges with respect to limited resources, delayed approvals, extensive documentation, an unstructured market and resource-intensive operations that needed to be outsourced. To address the challenges faced while simultaneously building a seamless product, they began hiring for a team that would help them in building PowerCred. Today, with a 10+ member team, PowerCred offers an API suite for small business alternate data across multiple data categories to leading lenders and financial institutions in Indonesia, its first target market.

When asked what he loves the most about PowerCred, here’s what Shrinivas said, “The highly competent team and the passion that we all share towards building PowerCred is what I truly cherish. We’ve built a great product and have come this far in a short period of time, I am confident this is just the beginning of us.”

PowerCred is always looking for dynamic professionals who are excited to work in a fast-paced environment with high growth opportunities. If this sounds interesting to you, please explore opportunities with us on our careers page.

Ready to get started?
Book a demo
Singapore
|
India
|
Indonesia
Certified by: